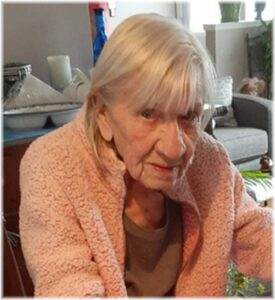 Beryl Marjorie Chalmers passed peacefully with her daughter by her side on Sunday, July 25th, 2021 at Hospice House Fredericton at the age of 91. Born on June 30th, 1930, in Birmingham England, she was the loving wife of the late Robert Chalmers.

In addition to her late husband Robert, she is predeceased by her parents William and Elise Bradbury; sisters, Olive Hayden, Ethel Willock, Cathy Stokes, and Jean Turner.

Beryl immigrated to Canada in 1953 with her first husband, James McLeary, and daughter, Julia. They settled in Toronto, Ontario where Beryl worked as a type setter for Coutts-Hallmark of Canada. She didn’t talk much about her childhood, but when asked she would tell stories of her life in England and how she loved Carnations her father grew in his garden, going to the picture shows with her friends and reading books. She told stories about spending time in the air raid shelters during WWII and how after the air raid shelters would open, she and her friends would spend hours looking for pieces of shrapnel to see who could find the best one. On quiet days, she would read books and could always find something to occupy her mind. She loved going to the “Bull Ring” markets or riding her sister’s bike through the streets, listening to Opera music and dancing with a sailor in uniform. Beryl was a determined woman and when she set her mind to something she did it, it was important to always be able to pay her own way. Beryl has seen the rise of new technologies, she has lived the horrors of war and the privileges of peace but she has lived a good life. We have lost a text book of knowledge in her passing. Beryl, may the music of your favorite singers play for you forever and may your dance floors never be crowded.  We miss you already and forever. Love Your Family.

The family would like to thank the doctors, nurses, and staff at Hospice House Fredericton for the care, compassion and companionship they extended to Beryl during her stay.

By her request, there will be no visitation or gathering. Arrangements have been entrusted to Modern Celebrations & Cremations (506) 458-8383. Donations in Beryl’s memory may be made to Hospice House Fredericton, Multiple Sclerosis Society, or the Canadian Cancer Society.