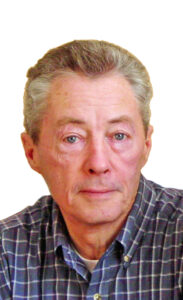 Gene will be fondly remembered as a man of very few words, an unparalleled work ethic and possessing an incredibly generous heart. Growing up in central New Brunswick, he worked on family farms, cut timber, and hunted and fished on the Miramichi. Upon high school graduation, Gene became a civil engineering technician at ADI Limited in Fredericton and subsequently, was a founding member of Gemtec Limited where he enjoyed a long career with cherished colleagues.

Eugene loved working in the outdoors – cutting the trees that became the lumber he used to build his family’s first home – and enjoyed a lifetime of tending to his garden and grounds.  Gene always had a warm pot of tea on the go. He loved a good card game. In retirement, he provided his family and friends with an unending supply of home-made strawberry jam. Gene was happiest when surrounded by his family and loved to watch his grandkids, nieces and nephews compete across various sports during their childhood.

At Gene’s request, and befitting someone who wanted no fuss over himself, there will be no formal memorial service or visitation. However, we are certain that Gene would be honored by donations to a charity of the donor’s choice or the Dr. Everett Chalmers Foundation palliative care designated fund (chalmersfoundation.com/donate).