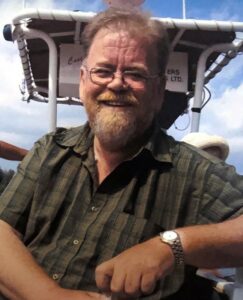 William Arnold “Bill” Adams was a simple man. His family was all he needed in life to be happy. His one and only daughter, Alexandra (Kevin); his grandchildren, Victoria (Jordan), Parker, and Cole, and his stepchildren, Nicole (Robert), and Jordyn (Melissa) were the center of his universe. We are sure Bill will be tuning his guitar, waiting to be reunited with his life partner, Suzanne Theriault, for another dance. To his family, Bill was their unsung hero. His love language was to be there for them always, unselfishly. His family will be “watching their step”, knowing he is walking alongside them.

Bill was proud of his Scottish heritage. His ancestors settled along the Restigouche River, where his cherished younger brother, Keith, still resides. His love for his late mother, Bertha, had no bounds. During his 4-month illness, Bill pulled strength from the qualities of the strong woman that raised three sons. She, alongside Bill’s late father Arnold Adams, instilled in them a vast love of the outdoors; picking wild strawberries, fishing salmon, and cutting wood along the homestead with her boys – Bill, the late Bruce Adams, and Keith. Bill always treasured these memories.

Bill’s career embodied his willingness to serve others. Starting his career as a Fish Warden, and then moving on to serve the Province of New Brunswick for 35 years. This included roles in Highway Patrol, Commercial Vehicle Enforcement, Department of the Solicitor General, and finally retiring from the Department of Justice and Public Safety.

To know Bill was to love him, and we are honoured to have been loved by him.

In keeping with Bill’s wishes, there will be no visitation or service. Bill will be returning to rest in his beloved birthplace, Matapedia, Quebec. For those who wish, donations in Bill’s memory may be made to the Fredericton Hospice House.